It's time for a more factual update:

First of all, I'm super excited to share that a few weeks ago I received notice that my dance/animation film from last year, "i" was chosen as a Regional Finalist for the Student Academy Awards. COOL. I was very happy to find out, and a little less happy to then hear I did not make it to the final rounds the following week. But I'm so honored to have been a regional finalist that I keep forgetting I didn't win. Because, yay, they like my film!

I'll actually be performing it live in New York for Conrad Tao's UNPLAY music festival! Check out more info at this here link here, and also here's a cute photo of me with my projected monster friend from "i" back when we performed it live at CalArts last semester: 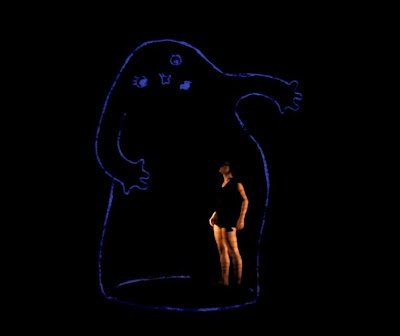 I'll also have as part of the festival a new experimental animation to be projected during the performance of Conrad's new original composition, "Iridescence." It's colorful and hypnotic. So, if you're in the area, go to the festival! There's great talent involved, and you get to see me dance.

I wrote an extended monologue about time travel that was accepted into the Digital Arts Expo that will be happening at CalArts this Thursday, May 9th! It's my writing debut, I suppose. It'll be fun.

I'm also working on exporting the animation I made as my designated yearly short and it's just a little something along the lines of an animated storybook poem about an existential crisis, entitled "I met a robot at a ballet once."  It'll be screened at the Bijou Festival at CalArts on Monday, May 13th at 10am (good morning!), and also Thursday, May 16th at midnight at the Cinefamily Theater in LA.

I am fighting my way through the war zone that is the end of the semester, waiting to hear back from LAIKA about a summer internship, and soon I'll have to pack to head back home to Florida for the summer. Really I'm just ready for some cheesecake and/or raspberries and to lay in bed catching up on RuPaul's Drag Race and sleep.

And to end on something silly and entertaining, here's my semester's project for my motion capture class, with fellow YoungArts alum Kyreeana Alexander's tap dancing turned into bunnies. Cute funny bunnies.

P.S. Do you like how I bolded things that are extra important?